Velocity Micro is probably a company you have never heard of, in fact before writing this post we hadn’t heard much about them either, however we love tablets and Velocity Mobile has just announced two new tablets which should interest you – these are the Cruz T408 and the Cruz T410.

These two tablets both boast a 1GHz Cortex A8 processor, 512 MB of RAM, a front-facing camera, an accelerometer, WiFi b/g/n, 4GB of built-in storage and a microSD memory card slot. The only noticeable difference between the two models is the fact that the Cruz T408 features an 8-inch TFT capacitive touchscreen display (4:3, 800 x 600), whilst the T410 features a 10-inch TFT capacitive touchscreen display (16:9, 1024 x 600). The image below shows that these tablets aren’t as thin as their rivals – but we wouldn’t say their designs are ugly. 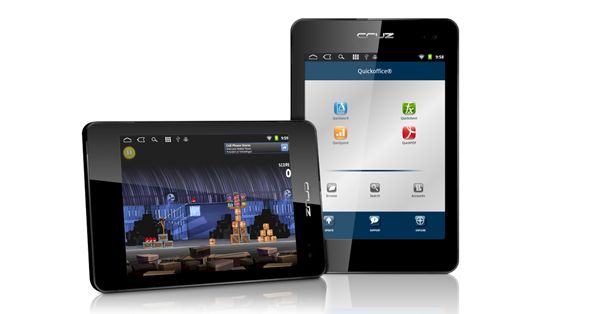 In terms of software both tablets run Android 2.3 Gingerbread and come with Adobe Flash Player 10.3, Amazon Appstore, Angry Birds Rio, Kindle for Android and QuickOffice pre-installed – from what we are told neither of the tablets will have access to the Android Market, which is a shame.

We must admit we are pretty impressed by these tablets, however the lack of access to the Android Market is a huge downfall, obviously people will be able to grab apps from the Amazon App Store, but what could spell trouble for Velocity Micro is the fact that we recently introduced our readers to the Lenovo IdeaPad A1, this will cost just shy of $200 and despite having a 7-inch display it has full access to the Android Market and some tech specs which the Cruz tablets are missing such as GPS and a rear-facing camera, also Lenovo’s name may play a factor in its success.

Have you ever purchased a Velocity Micro product? Share your experiences in the comments section.