When Apple released its first iOS 8 update, 8.0.1 it came with several issues that angered many users, although more so those that were having WiFi issue. This kept going on over several other updates, but only for a limited number of users. However, with a new version of Apple’s mobile operating system comes new issues, and there are already various iOS 9.0.1 problems after the update.

One such issue is major one, although only specific to the iPhone 6S and those apps that have to make use of its compass, along with its gyroscope data. We have already seen a number of complaints that this issue is affecting key assets, and so the apps are rendered useless. 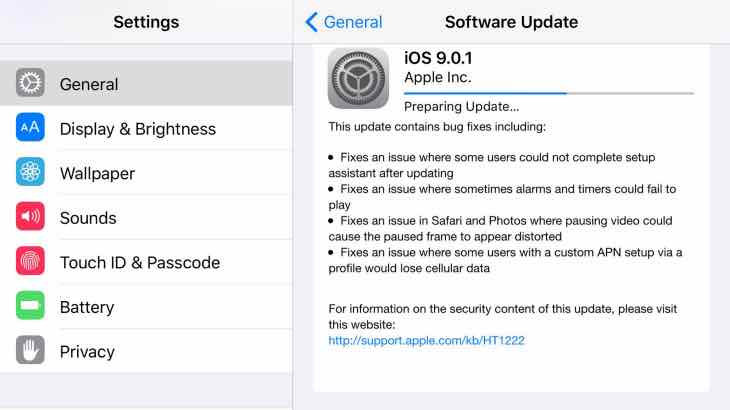 Sky Guide is a fine example of this, as you have to point the phone up to the stars and you should see a great deal of images and details on the screen, yet on the iPhone 6S the display drifts wildly.

iOS 9.0.2 update need to fix other 9.0.1 issues — There are also various other issues after people had downloaded the latest update, such as some people reporting issues with the App Store, like as still not able to download updates.

Call logs have also vanished, as has the cellular data toggle for apps. Users have also been complaining about the new Search features not working as they should, and an extreme lag in Game Center.

However what worries us is that we have also heard from some of our readers that since updating to iOS 9.0.1 they now have issues with Wi-Fi, so a repeat from last year. Although there have also been a few complaints on battery life, which we have already tried to help people with in a recent article.

What problems do you have since updating to iOS 9.0.1?