Did you know that in the last 12 months, Valve’s Steam has grown by a staggering 200%? As a result of the growing popularity, the company has just released a new user interface for the platform.

As reported from NewGameNetwork, the new interface is now in its public beta, and is available to all Steam users. Simply head to this link here and you can try it out for yourself.

One of the new features, allows you to see what games your friends have purchased through Steam, while customiztion features have also been improved, letting you find your favorite games more easily within Steam.

Have you tried the new interface yet? If so, vote in our poll below and let us know your initial impressions of it. 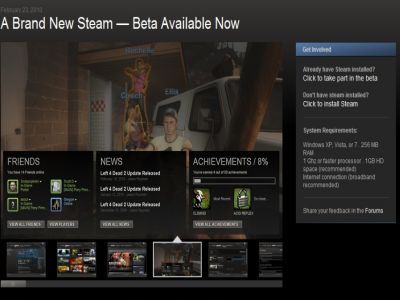