If you are lucky enough to have the money Audi have just announced the price for the new R8 GT. Only 333 are being made with ninety vehicles making their way to the US.

According to Chris Woodyard from USA Today if you want to own one of the supercars it will set you back a cool $196,800. Then on top of that you have to pay $1,250 destination and handling charge, but an extra twelve hundred dollars won’t bother you if have just laid out almost $200,000 in the first place.

The Audi is a breathed on version of the popular R8, but its 5.2-liter V10 has an extra 35hp delivering 560 horsepower. The bodywork is more than 180 lbs lighter than the original even though it has rear hatch spoiler and diffuser. 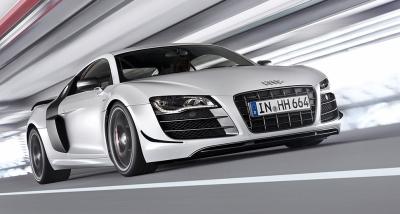 It also has an R tronic sequential manual transmission, and when you put this all together will give you a top speed of 199mph and 0-60 in only 3.6 seconds. Made of mainly carbon fiber and a Quattro four wheel drive system makes for a highly desirable car if you can afford it.