One of the main attractions of Dragon Age Inquisition multiplayer mode, is unlocking new characters to play with. When you start off, you are only given a choice of three and we have noticed that it is not entirely crystal clear on how you go about getting other characters.

The three choices available by default are the Archer, Keeper Mage and Legionnaire. Many of you are asking how to unlock new Dragon Age Inquisition multiplayer characters and we wanted to point out something you may have missed.

You’ll notice that under the description for each character, you can either unlock the key item necessary by finding it inside a chest, or craft it which is what most of you will have been doing.

For example, to get the Templar character you need to first obtain the Templar’s Regalia in Dragon Age Inquisition. Here’s what we think you may have missed though. When you go into armor crafting, you only see the Legionnaire crafting options available. 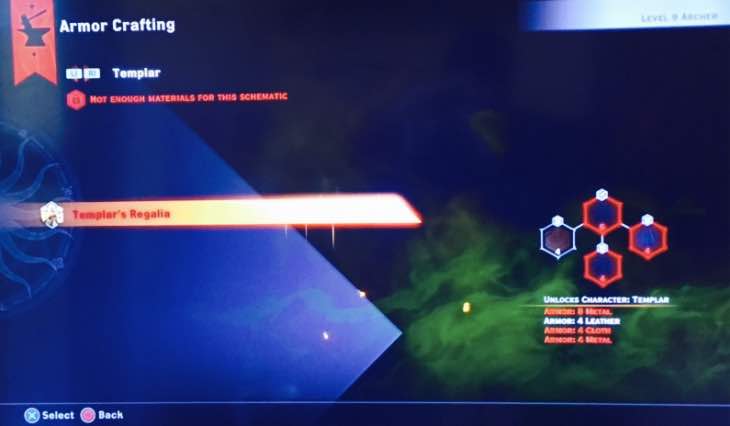 You actually have to physically scroll using L1 and R1 to find the right section displaying the items needed to craft the Templar armor – we completely missed this and didn’t even notice it the first time and we’re sure many of you are in the same boat!

When in the weapon equip menu, you don’t have to do any scrolling, as all of the weapons can be viewed at once – this may have thrown many players off in the Armor crafting menu, as you have to scroll yourself to find the relevant armor piece.

Now that you know this, you can simply acquire the items needed – in the Templar character example, you will need a combination of 8 metal, 4 leather, 4 cloth and another 4 metal.

Once you have the items required, you will see that the Templar character is unlocked, as well as its unique skill tree. Simply repeat the formula until you have obtained all characters – including the rarer ones such as the Arcane Warrior.

Forgive us if we are stating the obvious, but we completely missed the fact that you had to scroll across before you could craft other characters items.

Let us know how you are getting on with multiplayer so far and if our information has helped you.