We’ve been waiting for the official 2014 Corvette Stingray horsepower figures for a while now, and while General Motors has yet to announce them, some leaked C7 specs has shown us just what to expect, and it shows that fans of Chevy’s latest version of this legendary vehicle will be pleased to see an increase in horsepower over its predecessor

We say this because the 2014 Chevy Corvette C7 Stingray will deliver 455 horsepower, which is 5 more than what we first assumed. However, when you consider C7 rivals, that figure does seem a little low, especially as GM believes it can compete with the Porsche 911, although we have to remember that these figures are just for the base model, and as such is far more cheaper that the 911.We do find it funny how several Corvette7 Forum members said that this is too much power — come on, you can’t have too much power.

However, the 2014 Corvette C7 does pack more of a punch than the current C6 performance figures, but we have to wonder if it’s a big enough increase, as the latest C6 is just 25 horsepower down over the upcoming C7? 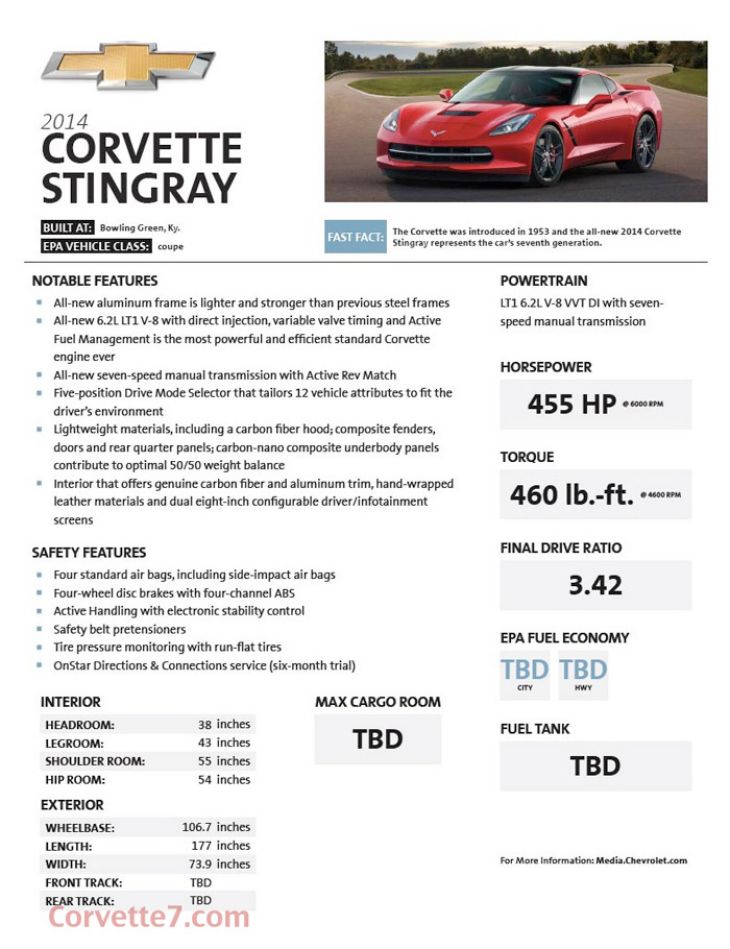 It would’ve been nice to see the 2014 Corvette Stingray top speed and other performance figures detailed, but they are yet to be confirmed. Although we can tell you that it will produce 450-pound feet of torque. It seems as though we will have to wait a little closer to the 2014 Corvette Stingray release date before GM shares those figures with us.

Over the past few months we have seen more details leaked on what new 2014 Corvette C7 Stingray colors we can expect to see, and it was certainly nice to see Lime Rock Green being added to that list.

Maybe we should not judge the upcoming C7 before we’ve seen a proper 2014 Corvette Stingray test, just to show us its handling and overall performance both on the track and the road. We say this because while the current C6 model is a dream vehicle to drive on the track, when you take it onto the streets it becomes a completely different vehicle to drive, and that’s not a positive thing either.