We have one potentially exciting rumor to report on now, as we can see that speculation is building on Rockstar throwing a surprise into the game for the GTA 5 Online Halloween DLC update, by finally giving players their Undead Nightmare Zombies DLC for GTA 5.

A screenshot is currently doing the rounds on social media, appearing to suggest that it was leaked by accident on the Rockstar Social Club.

Have a look below and you will see Undead Nightmare listed alongside a new Halloween weapon ‘Spiked Bat’ that previously wasn’t included in the initial Flashlight leak. 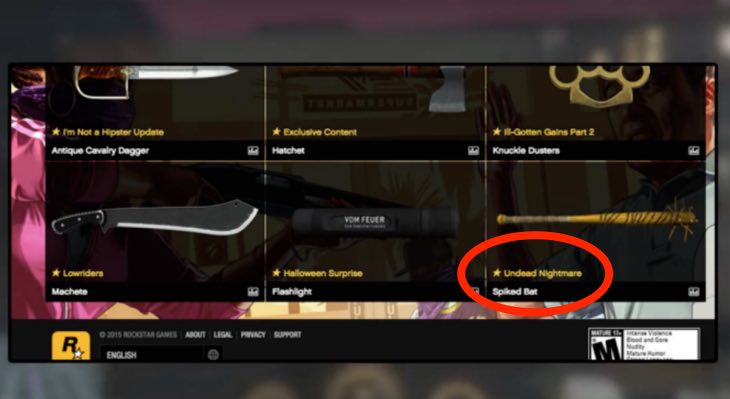 We’re well aware that this could be the work of an expert photoshop con artist, but we just thought we would share it anyway and see what you think since Rockstar are still finalizing the Halloween GTA 5 DLC and are yet to publicly announce it – do they know that Halloween is this Saturday?

You can see the ongoing discussion over at the GTA Forums where the rumor originated. We have a feeling that we could be hours away from an announcement from Rockstar so it will be exciting to see if this rumor is true.

Would you love to play a Undead Nightmare zombies DLC mode for the GTA 5 Halloween 2015 update? Remember that the Flashlight has already been leaked with a ‘Slasher’ mode and two Halloween GTA 5 cars, so there is some great content to look forward to.

Give us your thoughts on the last minute ‘Undead Nightmare’ DLC rumors for GTA V Online below.