There’s nothing like a massive Uncharted 4 banner outside the E3 2015 venue to create hype around both the massive gaming event and this upcoming Naughty Dog game. This is exactly what you can see within the photo below this article, and mentioned by Naughty Dog Co-President in the tweet below.

As if Evan Wells forgot about the E3 countdown to June 16, 2015. Of course, there’s plenty of live streams for keynotes before E3 even officially opens to public. 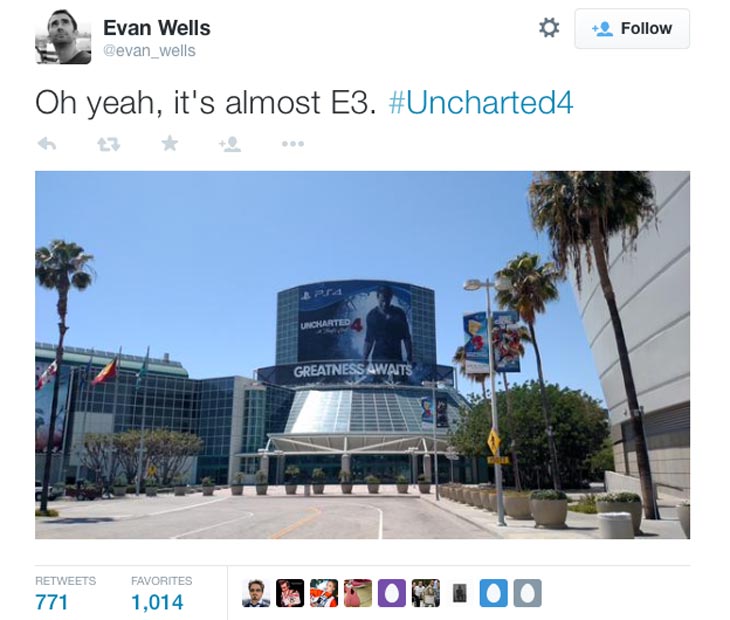 Nathan Drake has been featured on just one of the two entrances to E3 this year, with another title featuring above the other. This wasn’t just featured by Wells, but also a number of people on Twitter that live in the area. The Uncharted 4 release date will be after Spring 2016.

E3 2015 countdown – there’s a number of countdowns online for E3 and these include this one at Time and Date, and another on Aarma3.com. Many of the game keynote speeches will be before the E3 event starts on June 16, as seen with the Sony E3 conference time.

Over the weekend, we were treated to an official E3 2015 teaser video that you can watch below. E3 is coming, what are you most excited for and how are you filling in the time until E3 starts?