We have some fantastic news for PlayStation 3 owners now, especially if you are a big fan of Uncharted. The latest entry to the ongoing multiplayer beta for the game has now opened again, and we have details on how you can obtain a free code into the beta.

Naughty Dog has been beta testing Uncharted 3 since June now, and we are almost at the finish line since we just have a few weeks left before the game will finally release exclusively on the PS3. Before that, one more wave of beta testing will commence and IGN and Fileplanet are giving away 10,000 beta codes to PS3 users, with no catch whatsoever. Click here to get your key.

Obviously you’ll need to be quick if you want to get a code, as they are going to get snapped up pretty quick as you can imagine. Usually beta access is restricted to PSN+ members only, but since we are nearing the release date, we think Naughty Dog wants everyone to get a taste of the action before the full game goes live on November 1.

What you will need handy though is an account with FilePlanet, and then once you have that you’ll get your beta key after you’ve entered a simple security code. If all goes well, you’ll get a key and this can be used on the PlayStation Store immediately: simply head to the redeem voucher section of the store, input your code and then hey presto, you’ll get the download prompt for the beta. 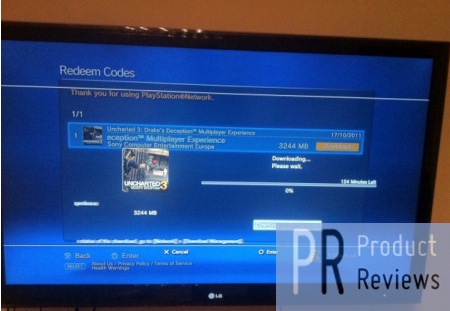 A word of warning though – As you can see from the image above, the download weighs in at a hefty 3244MB, so you may want to leave your PS3 downloading in the background and go and do something else for a few hours, or maybe an hour depending on your network speed. Still though, this is a no catch multiplayer beta we’re talking about for one of the potential candidates for Game of 2011. With this in mind, the download time is well worth the wait.

Have you already sampled the multiplayer beta? If so, what are your impressions of the game?