We have some fantastic news for those of you who are intent on picking up a copy of Uncharted 3 : Drake’s Deception when it launches on the PlayStation 3 on November 1st – Sony has just dropped a huge incentive for those planning to get the game at launch.

Uncharted 3 is shaping up to be one of the games of the year, and during a recent statement in which Sony confirms that the game has just gone gold and entered into final preparations before release, a surprise has unfolded, coming in the form of exclusive beta access to Starhawk in 2012.

If you don’t know, Starhawk is the follow-up to the hugely popular PS3 online shooter Warhawk, and a beta will start at some point during the early months of next year. Below is an example of the voucher code you’ll receive by buying Uncharted 3 on November 1st, as taken from the US PlayStation Blog. 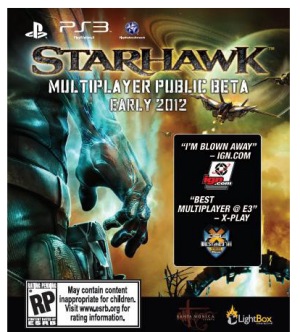 We certainly didn’t expect that to happen, so it’s a great surprise for those buying Uncharted. Along with DUST 514, Starhawk may be one of the surprise games of 2012, so to get an opportunity to try the game before anyone else is a deal which you’ll be crazy to turn down if you’re a PS3 owner.

Once you’ve obtained your beta key, prepare to be joined by Warhawk players too, as we told you a few months back that Warhawk players would be given first priority for the beta by Sony. If you haven’t seen any gameplay for the 32-player capable Starhawk yet, check out some footage here which was taken during this Summer’s E3 expo.

As for Uncharted 3, there isn’t long to go until the global release date – is it a game which is a must buy for you or are there better games out there in your opinion?