This autumn is set to be a thrilling time for gamers of all kinds, as so many highly anticipated titles are due out for release. These games include the latest instalment for the popular FPS series, Call of Duty: Modern Warfare 3. Another popular series that is about to get another instalment is Uncharted with its third in the series, Drake’s Deception due out November 1st.

In the build up to its release, Sony has announced their plans to launch an Uncharted 3: Drake’s Deception PlayStation 3 bundle at the same time the game is released. It will be a limited edition that offers a copy of the game as well as a month subscription to PlayStation Plus, free of charge and a 320GB PS3 console all for $299.99.

So far the deal has only been confirmed to be available to the US, with no word of a similar deal in the UK or Europe as of yet. CVG believe it won’t be long however, before we do hear about a similar offering elsewhere, judging from the backing Sony is giving the game. However the game won’t be out in the UK until November 2nd.

We recently brought you an article comparing which storylines will be wining your hearts out of this PS3 exclusive and the Xbox 360 exclusive Gears of War 3. Both games belong to successful franchises and will already have a well-established following, but most people will only be able to play one or the other. We also revealed some special edition content you can expect from the game in another article, which consists of an in-game multiplayer bonus and a manual which folds out into a map.

Are you looking forward to Uncharted 3’s release? Will you be getting the limited edition PS3 bundle? 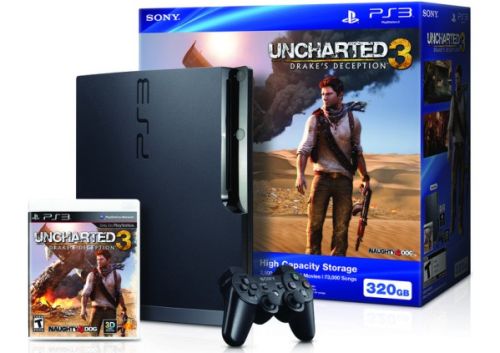