There may well be quite a lot of hype surrounding the much anticipated Uncharted 3 game already, but Naughty Dog appears to want to build on that hype by unveiling a few more details about their upcoming third-person shooter / action-adventure title.

As Oliver East over at justpushstart.com recently noted, the game’s main character Drake will have various different animation sets, which allow him to react to his environments accordingly. For example, when Drake is in the burning building, he will shield himself from the fire.

It appears that the stealth element will also be more prominent in the Uncharted 3 game, which according to Ben Dutka over at psxextreme.com means that the chance of sneaking up behind opponents will be drastically improved in the next installment. 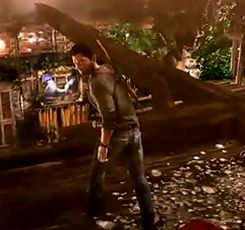 Finally, the developer has confirmed that all the money players earn within the Uncharted 3 game’s story mode will in fact be transferable from single-player to multiplayer. This of course means that players will be able to use their cash to buy weapons and upgrades for online play.

Are you looking forward to playing the Uncharted 3 game?