You have recently been treated to the debut trailer as well as the official release date for Uncharted 3: Drake’s Deception, but now we have something even more exciting for you now – the world’s first gameplay video.

Jimmy Fallon has definitely got to be one of the world’s luckiest people, as he is officially the first person outside of the Naughty Dog developing team, to have a taste of some Uncharted 3 gameplay action before anyone else.

The latest episode of his live show on NBC had a special preview of the upcoming game, as Fallon also managed to get some questions in from Naughty Dog boss Evan Wells and another member of the dev team.

The short demo he managed to play shows off some action from one of the intense levels in the game, as main character Nathan Drake has to navigate his way through a French building which is in the midst of a huge fire which is starting to collapse at the same time. 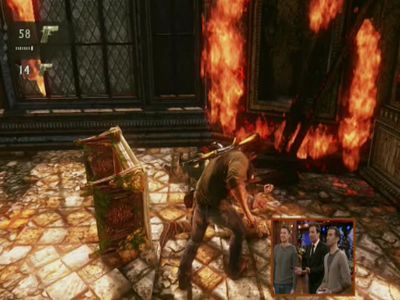 It looks pretty stunning as you would expect, and you can tell that Fallon is pretty excited to be able to play it before anyone else. Just to remind you, the game is due out on PS3 on November 1st, 2011. Take a look at the clip below, courtesy of VG247, and let us know your thoughts of it.

In terms of gameplay, does it look better than Uncharted 2 to you? What are your thoughts on the ‘desert setting’ for the game? We’ll bring you new details as we get it.