As most of you will probably be aware, the Motorola Droid Bionic is finally available to buy this week, and in a few hours, patient fans will be able to buy the device which has been nine months in the making since it’s initial announcement.

In the meantime, we have some unboxing screenshots of the highly anticipated device to show you, letting you see just what the Droid Bionic is all about and if it meets your expectations before you rush out to the shops and buy one as an impulse purchase.

The Droid Bionic is Verizon’s next 4G LTE capable handset, and it comes equipped with key features such as a 4.3-inch qHD display, a 1GHZ Texas Instruments dual-core processor, a fantastic-looking 8 megapixel camera with a VGA front camera and also the ability to record videos in 1080p HD quality.

The unboxing we have to show you comes courtesy of the guys over at PC Magazine, as they have uploaded a series of screenshots showing the new device in all its glory. Below is a sample of one of their images. 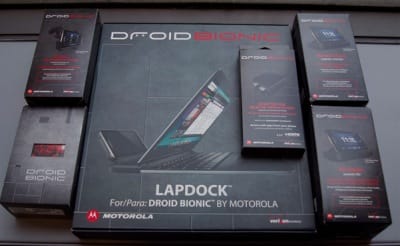 Aside from their unboxing screenshots, they have also provided their first impressions of the Bionic, and as you may have guessed – it looks like the Bionic is shaping up to be something special and a device which was well worth the wait. One of the most pleasing things about the handset which owners will appreciate is the fact that the Bionic comes installed with the very latest version of Android Gingerbread – 2.3.4. Hopefully the device will also be eligible for an upgrade to Google Ice Cream Sandwich when that becomes available later on in the year.

Have a look at their article for the rest of the screenshots. If you are looking for an unboxing video instead, we have included one courtesy of Phonedog for you to take a look at below. Does the Droid Bionic meet your expectations on first glance or not?