Here is some news for those of you who are sick of their phone running out of battery. The solar powered Umeox Apollo. Thanks to its embedded solar charger, this design from Intivation could make a dead battery a thing of the past.

You’re probably thinking a phone that runs on power from the sun can’t be all that and is probably too fragile to do anything with. Well we’re happy to tell you you’re wrong because this is a solid, touchscreen smartphone that will run an Android 2.2 OS.

The Umeox Apollo debuted at the MWC in Barcelona yesterday and as Engadget reports; it seems to have all the essentials you would need from a phone. You can expect this smartphone to have a 3.2” touchscreen capacitive display, 3mp camera, MicroSD slot for memory expansion and MediaTek processor. Full list of specs can be found at Intivation. 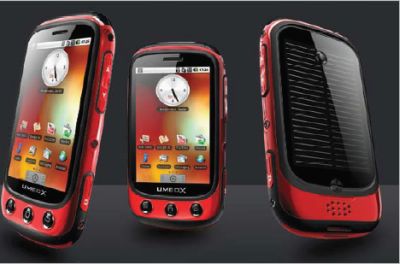 As for cost the device is said to be priced contract-free, at $100 which suggests it may not be the most capable on the Android market. Engadget who were at the MWC say that the device starts shipping to India, Europe and Latin America in May this year.

Will you be getting an Umeox Apollo? Are solar powered phones something you would like to see more of in the future? Let us know your thoughts.