It seems as though Intel is looking at replicating Apple if the new range of Ultrabooks is anything to go by. This new class looks to be treading on the iPad 2 and MacBook Air territory. The chipmaker believes that this new kind of notebook will also take some of the best features from tablets and incorporate them into these slim new devices.

This is very funny indeed, as we have heard this before from Apple and their Mac OS X Lion, which 9 to 5 Mac also picked up on. However, at least they did it all in house, by taking everything that is good from their iPad and will then use it in their upcoming Mac OS. Both the iPad and Air have instant on, so seems funny how Intel are now making a big deal from it.

We have to wonder why such big companies like Intel are always late to the party? Do not get us wrong competition is great and the first range of Ultrabooks will be a great rival to the new MacBook Air. Having said that, we do hope that Apple do not go down the A5 route and choose the Sandy bridge processor instead, as this would have a huge effect on performance. 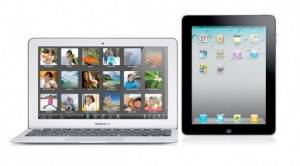 We can expect the first Ultrabooks to cost below $1000 and will be with us in time for the holiday season. Intel believes that there is a big future for this new type of notebook, saying that they will account for 40 percent of all notebook sales by 2012. Now that is a huge claim, one that we have only come to expect from Apple. We have to ask ourselves if there is room for another new market, and if so how will it affect the iPad and the MacBook Air?