The growth of social networks seems to be unstoppable, well at least for some of those networks. The Social Network movie opened people’s eyes to the ‘Facebook’ story, even if it may not be an exact recount on what happened. In 2011 it will be more important for companies to use social media for promoting their brands than any year before.

If you’ve been to a social media event — like Social Media World Forum – then you will already know a little about what brands are doing with social media, and this ranges from Coca-Cola to UFC. 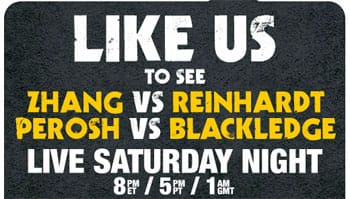 UFC President Dana White has been promoting the social media idea, and we’ve seen him explain that Facebook and UFC are here to stay in the past, which is great for international viewers. China’s Zhang opened up the UFC 127 fights on Facebook, and this ended in a win, which also highlights a reason for UFC to enter social media marketing in this way. China has a strong martial arts background, and is an untapped MMA market, this may be partly the reason Zhang’s fight was made available on Facebook.

There are a number of reasons that UFC will want to use Facebook, and other social media marketing. Top of the list would be fan engagement, UFC will be able to connect with fans and they get to talk back to UFC, although this can have management problems too. Another reason would be brand credibility, its good to see UFC moving with the times and connecting via popular social networks like Facebook.

Do you love the idea of UFC giving fans free fights? What do you want to see UFC do next with Facebook? You can view the results of UFC 127 here, or read more about Facebook.