When THQ first launched its uDraw graphics tablet peripheral for the Nintendo Wii back in November last year, it was only made available to U.S. gamers. There’s good news for UK gamers now however, as the device has just been given an official release date.

According to George Reith over at gamingbolt.com (sourced from MCV), the art tablet will be hitting UK stores on March 4th. The uDraw peripheral will come bundled with the uDraw Studio art package, Dood’s Big Adventure and the board game adaptation, Pictionary.

As Fred Dutton over on the eurogamer.net website recently reported, the publisher has promised more support for the peripheral later this year. Although THQ has yet to confirm a RRP, online retailers such as Amazon.co.uk are listing the product as £50.99. 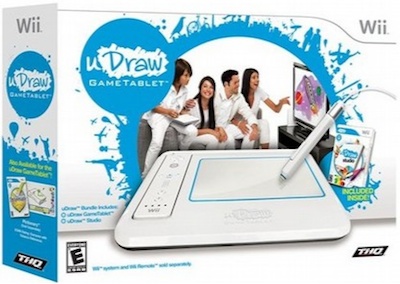 The uDraw device — which you can see in action on a video posted on the eurogamer.net website) — has proved to be quite a success for THQ, managing to shift 1.2 million units since its launch. What do you think about the uDraw graphics tablet and its supposed price?