It appears the ongoing Assassin’s Creed launch problems have had an adverse effect with regards to Ubisoft stock. It has now been confirmed and widely reported that Ubisoft stock price is down today, by as much as 9% amid a fierce backlash on social boards from early buyers who are not happy with their purchase.

While Assassin’s Creed Unity looks like a fantastic game on the whole, those who have sat down to play have discovered that in its current state, the game is prone to crashing and graphical glitches – the latter of which Ubisoft has now confirmed with a statement here.

It has hasn’t stopped Yahoo Finance publishing a report which has been picked up and thrown around social media instantly though. Their report titled “Ubisoft Stock Gets Crushed after Abysmal Assassin’s Creed Unity Launch” includes a 9% stock price drop for the game, which they say is contributed entirely to the problems that gamers have had since launch -thus creating a negative impact on the stock market. 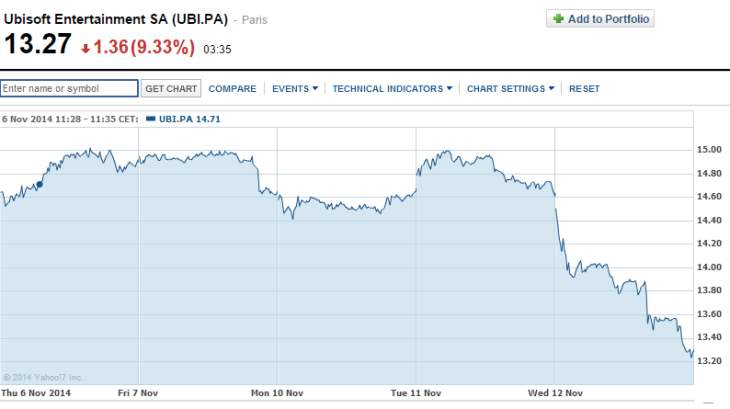 This isn’t the first time that a major game publisher has received a drop in shares however, so some are unmoved by this sudden hit. For instance, the 9% figure that has been circulated at the minute has been analysed in a separate report here by Kotaku, who say that it isn’t really as bad as others are making out and that Ubisoft’s stock prices are actually very healthy at the moment.

What is your reaction to the sudden drop of Ubisoft’s stock price? Are you one of the many who are having a few problems with Assassin’s Creed Unity at the moment?

Remember to look out for future patch updates on PC and PS4 which may fix the problems you have been having soon.