Some rather exciting news to bring you now, as an animator at Ubisoft has revealed that a third Assassin’s Creed game is due to release this year, as well as confirming Splinter Cell: Conviction for PS3 – again.

As reported from VG247, the reveal came from Michael Donnell, who is a 3D Animator at Ubisoft Montreal. Donnell’s LinkedIn profile has now been modified with the juicy details removed, but luckily we have a screenshot below with the original details.

It is now looking likely that Splinter Cell: Conviction is a timed-exclusive on the Xbox 360, but did anyone expect another Assassin’s Creed game to come out so soon after ACII?

It could be a PSP game, which would make more sense, while users are already speculating that the game may use the same engine as ACII, which would explain the speed of release.

What are your thoughts on this? More details over at VG247. 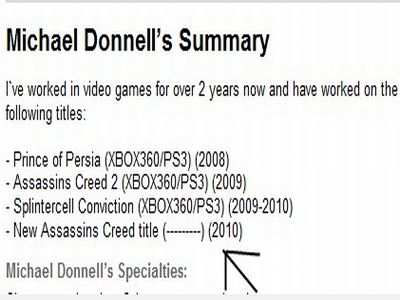