We’ve seen the Uber taxi app hit the headlines a few times over the past couple of months and while Taxi drivers might have a problem with this application, it seems they’re not the only ones and some Android users say the Uber app is not working. Apparently, on selected Android smartphones the private driver app has a problem finding your location.

It’s amazing to see London taxi cabs converging on Trafalgar Square this week to protest about an application, especially considering the Uber app simplifies getting a taxi for people and makes everything that much easier, but then you can also understand why some people want to fight change if they’ll lose money.

The latest update on Android came within the last couple of days and version 3.0.22 of the Uber Android app delivers bug fixes, enhanced performance, and within this version you’ll see a complete redesign since 3.0. Some of these changes have caused issues for users and this is seen in the feedback being left on Google play. 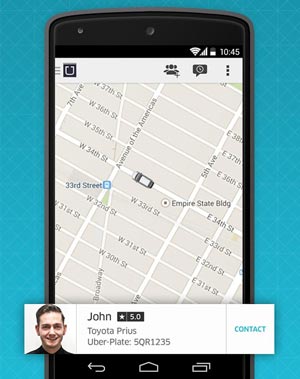 Uber taxi app issue finding Android location – a number of Nexus 5 owners have complained about problems finding a location and while most agree the “Uber app is amazing”, it also has problems opening for some and gives an error message “we are having trouble finding your location”. Another added, “Every time I go in and open the app since the update it has trouble finding my location. The default Google maps has no problems pinpointing my location”.