Only a few days ago we heard about a few third-party applications being suspended by Twitter, the exact details can be read via our earlier article, which explains the reasons behind UberTwitter, Twidroyd, and UberCurrent suspensions.

The first on that list, UberTwitter, has seen a rebranding and will now be known as UberSocial, which the official website explains is aimed at “reflecting its broadening reach”. Tying yourself to one social site would not be a good idea, especially when the app aims to be more ‘social’.

You can download Uber Social for BlackBerry, Apple iPhone and desktop computers. Those behind Uber Social want the app to be used as a “key social communications tool”, which goes beyond just Twitter, and now includes posting media to Facebook. Even better is the price of the app, and that is FREE.

The UberSocial apps had their access to Twitter restored just a day after the blocks, with Twitter noting that their review had shown steps were taken to fix the ‘violations’ that were reported. 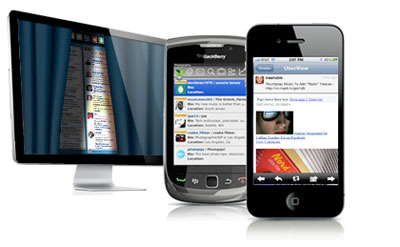 Memeburn has taken a look at the Twitter war brewing between two of the most popular BlackBerry apps, which are UberSocial and Twitter for BlackBerry. It’s their view that UberSocial is the clear winner thanks to the ‘2.4-million users’.

Have a look at the UberSocial app, and the new features under the rebranding, and let us know what you think of the app. Does it top Twitter for BlackBerry?