We woke up to find out about a rather surprising trend on Twitter, that being #savetwitter due to millions of users asking if Twitter is shutting down in 2017 due to Cyberbullying.

The #savetwitter hashtag is actually in the top 3 tweets globally at the time of writing, so even though this may seem like an absurd topic to most of you – it’s clear that a lot of you are worried.

Just take a look at what some of you have been saying, a range of humorous answers from those who question what they will do with their life if it happens, to others hoping that Facebook and Instagram shut down instead. 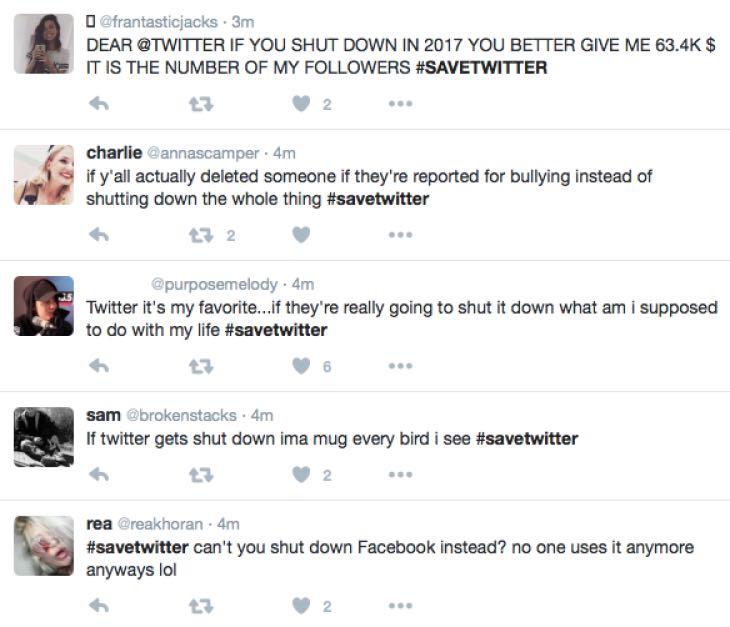 Cyberbullying is obviously no joke however and it’s a major problem for Twitter to deal with as trolls continue to ruin other people’s life with a simple Tweet made with an anonymous account.

Is Twitter shutting down in 2017 though because of it? Of course not, that would be absolutely ridiculous and it just wouldn’t happen with millions of users relying on the service for day-to-day needs.

There’s other ways to tackle cyberbullying, but shutting down Twitter isn’t one of them. Are you shocked to see your timeline flooded with the #savetwitter hashtag and users actually thinking it’s going to happen?

Give us your reaction below. What would you do if Twitter shuts down in 2017?