Social networking website Twitter has just updated its application for iOS device owners, and some nice new features have been added.

This update is quite a big one, and will allow users to follow trends and find new people to follow a lot easier. Users will now find uploading photos much easier than before as there is a camera button in the toolbar.

The image preview has been improved to allow users to quickly take a new picture or choose one from their library.

Friends can now be found if they are on Twitter, and have chosen to be discoverable by using the contacts in your phone. Users can see trends which are based on their location. Links are now automatically shortened after users have pasted them into the Tweet box. 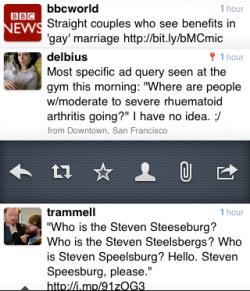 Tweeting on the go is now easier with Autocomplete for hashtags and @usernames, and also new is the Direct Message conversation view which allows users to keep better track of messages.

Twitter 3.3 is available free on the App Store. Requires iPhone, iPad, and iPod Touch with iOS 3.1 or later.