If you own a PlayStation 3 or Xbox 360 console and you’re possibly thinking about buying yourself a new gaming headset, I think we have some news that you really won’t want to miss out on. We’ve just received word that Turtle Beach has recently unveiled its new Ear Force Z6A and PX3 gaming headsets.

According to a recent engadget.com article by Amar Toor, the wireless PX3 headset — which was designed for use with the PS3, but is also compatible with the Xbox 360, PC and Mac — includes 18 interchangeable audio settings, as well as supporting additional presets that can be downloaded directly from Turtle Beach.

The PX3 is the very first Turtle Beach headset to come with a rechargeable, 10-hour battery. Just like the Turtle Beach PX5 headset, the PX3 comes with an impressive set of audio features. This includes Sonic Lens with Sound Field Expander and Ear Guard, with Blast Limiter technology. 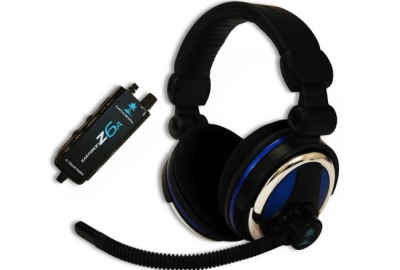 As for price and availability, the PX3 has an MSRP of $149.95 and will be available sometime this summer. Meanwhile, the Xbox 360-friendly Z6A headset is powered by a 5.1 channel amplifier with bass enhancement, and boasts 8 amplified speakers (including 2 subwoofers).

The Z6A has an MSRP of $99.95 and will also be available sometime this summer. Are you thinking about buying a new gaming headset?