If you want to turn off the PS4 controller light bar then most of Product Reviews readers should already know it’s not possible, well not without a firmware update to add custom settings. It is not about the feature being impossible, instead Sony has chosen to leave this ability out and when Shuhei Yoshida was questioned about making a change the answer was no.

When we first got hands-on with the Sony PlayStation 4 console the bright LED lights on both our controllers were welcomed, and the way motion technology has been integrated with the pads helps open up default features for games, but a few months on some people are unhappy about the lack of settings for these lights.

We’ve had no problems with our 65-inch LED TV and found no need to turn off the PS4 controller light bar, but it’s clear that a growing number of gamers hate not having the choice to turn off the blue light or at least turn its brightness lower. One commenter said, “We need a settable dimmer for the controller light, as it is too bright in the dark and this can help with battery life too”. Another added, “I play games directly in front of my glossy HDTV screen, so I see the reflection of the controller on the screen and it’s really annoying. I don’t have the camera, so feel there’s no major need for it in my opinion”.

While we agree with the need for giving people the choice to turn off the PS4 controller light, we should make it clear the LED will use very little power and Sony even confirmed this will not result in much lower battery life. 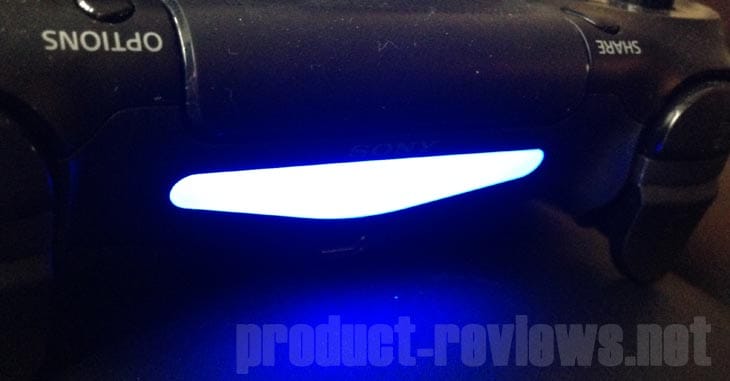 Petition demands ability to turn off PS4 controller light – we have seen hundreds of comments asking for a PS4 firmware update to bring this ability, don’t expect it in the next update (1.62), and we found a petition asking Sony to make this change. You can see the request on the popular petition website change.org, although we were surprised that it only has 3 supporters considering the amount of fuss in online blogs and within popular forums.

The petition is titled “Light Sensitive PS4 Users”, then with the request for Sony to “give option to turn off light bar on PS4 controller”. The lack of supporters will be due to not many people knowing about this petition, or that most gamers think it’s not worth joining the demand for change.

Would you like the option to turn off the PS4 controller light bar? Did you join the petition asking for Sony to add this ability through a firmware update?