While reading back on Tina’s posts about Tron Evolution, I can clearly see that reviews have been mixed. It is for this reason why I thought I would offer a review roundup, just to see if this game really is worth buying. One thing that I have picked up on with some of these reviews though, it is no movie rip-off.

The first Tron Evolution review is from Steve Boxer from the Guardian. He begins by saying that this game aims to help us learn the backstory form the original movie and the latest ‘Tron Legacy’. Boxer believes that fans of the movie will love the game, and Disney Interactive has also managed to offer something that will make the game appeal to those who have not even seen the first Tron movie. Overall he gives it 4 out of 5 stars; read his full review here. 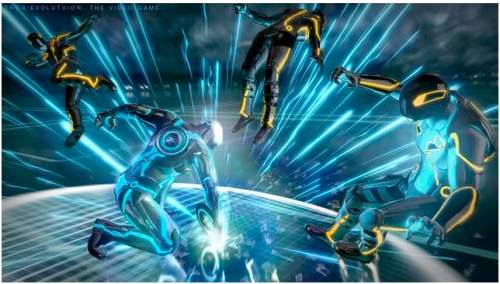 Second up with have 1Up; Dustin Quillen believes that if ever their was a movie that was screaming to make it to the games console, then this is it. Quillen seems to have a hard time with the story, and points out that we could get easily confused. However, he does add that the game helps to capture the magic of Tron. Read his compete review here.

Finally we have Metro, who asks if this is the video game tie-in that the Tron movie deserves? Having not seen the new movie, so they are unable to see how relevant the game is to the movie, but previous reviews mentioned above have already answered that for us. However, I think that Metro has managed to sum the game up in one quote, gameplay “is a sci-fi version of Prince Of Persia.” To understand what he means by this read David Jenkins full review.

This is not the only game that Disney has recently released, another is Disney Epic Mickey, which as you can tell from our recent post has also been getting some mixed reactions.

What do you think of the new Tron Evolution game, does it do the movie justice?