If you’ve been waiting to hear news on an official release date for Omega Force’s upcoming action-RPG title Trinity: Souls of Zill O’ll, then you’ll be pleased to know that it’s now been announced. Fans don’t have to wait too long either, as the game will be arriving in February 2011.

According to a recent joystiq.com article by JC Fletcher, North American gamers will be able to get their hands on a copy of the Trinity: Souls of Zill O’ll — which is titled Trinity: Zill O’ll Zero in Japan — game on February 8th, while European gamers receive it a couple of days later on February 11th. 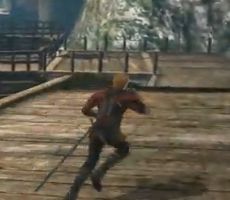 Confirmation of the official release date came via the Twitter page of Tecmo Koei Europe, according to Wesley Yin-Poole at eurogamer.net. The game follows its three heroes — Zelena, Daguza and Aleus — through a rather meaty story that features plenty of side quests.

Characters can use either swords or magic to defeat their enemies, or they might even like to pick up fallen debris and use that instead. Players can even freeze lakes in order to walk over them. You can also view a trailer of the upcoming game, by visiting eurogamer.net.