As we get ever closer to Christmas young children will be getting more excited as each day passes. Many will be paying a visit to see Santa or writing to him with their wish lists. Now you can transport your children to the North Pole to chat with Santa via an iOS app.

Talk With Santa is brought to you by the Funnel Design Group, and is available for owners of the iPhone, iPod Touch, and iPad. The application allows parents to take on the role of a virtual Santa via voice chat from another device. There are also a number of festive and fun animated actions that parents can get Santa to perform.

These will amaze and delight young children as they chat along to Santa. The application is the first of its kind that will allow parents to talk and interact with their children via a virtual character. Parents need not worry about children recognizing their voice, as the app has a real time voice altering feature so Santa will sound like he should do.

Children can now ask direct questions to Santa without waiting for a reply from a letter. To use the device you need to connect two iOS devices to a Wi-Fi network with one set to parent mode and the other to child mode. Then the child looks at Santa and talks to him with the parent hearing their young one and replying as Santa. 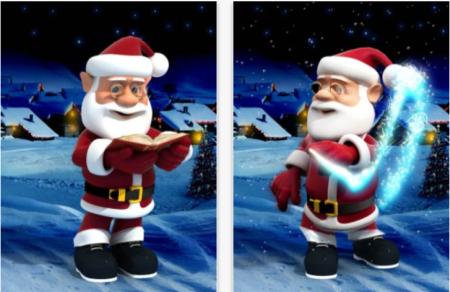