During Computex yesterday we knew that the ASUS Padfone was going to be showcased, but what we did not know that another similar device had been shown a couple of days previously. The CMIT TransPhone was that device and from what we have read they are both unique in appearance and features.

Looking at the video of the Padfone concept version we have to say that TransPhone has the edge with how the smartphone docks to the tablet. With the former you have to lift up a rear cover click the handset in then close that lid, which all seems a bit clumsy. However, the latter seems to be much easier, as it clicks straight into the back and just seems a much simpler design.

Saying all that, we still have to remember that the ASUS Padfone is still a dummy and things will change, but first impressions show that the TransPhone has the edge. Now we do not know what hardware is hiding inside the Padfone, but Engadget has learned that the TransPhone from CMIT will have a 1.2GHz dual-core processor, USB and HDMI ports and a SVGA display. 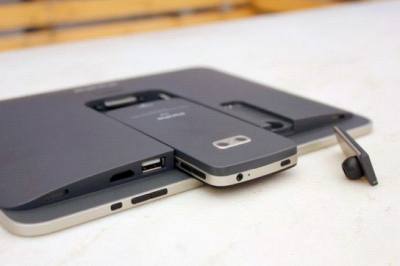 There are no details for price or release dates for either device yet. We are still not certain if these will take off, as we have never felt the need for such a device/devices. Having said that, we can see how they will benefit those who have a presentation saved on their smartphone and wish to show it off on a much larger screen.

Is there really a market for the CMIT TransPhone or the ASUS Padfone?