We have some good news for those of you who have been keeping a close eye on the status of the highly anticipated ASUS Transformer Prime tablet / notebook hybrid. ASUS has just made the device official and we have a summary of all the key information for you.

First of all, we can confirm that the ASUS Transformer Prime will be the first device in the world to feature NVIDIA’s brand new Tegra 3 quad-core processor, which promises an increase in graphics performance of up to 3 times the power seen in Tegra 2 devices.

We told you that the device is rumored to be getting Ice Cream Sandwich, but the rest of the hardware specs certainly do not disappoint and will easily make up for having Gingerbread 3.2 Honeycomb out of the box. For display, the Prime will boast a 10.1-inch 1280 x 800, Super IPS+ display fitted with that trusty Gorilla Glass material, and we’ve heard from Engadget that the display touts a 178-degree viewing angle with a max brightness of 600 nits.

Other specs include an 8 megapixel HD auto-focus camera on the back, 1080p HD video recording, a 1.2MP front-facing camera, 1GB of RAM, a gyrocscope, e-compass, one Micro-HDMI port, a MicroSD card reader and much more.

In terms of pricing and storage capacities, you’ll get two options consisting of either 32GB costing $499 or 64GB which will set you back $599. Of course, the Transformer Prime wouldn’t fufill its true potential without the optional dock and keyboard converting it into a notebook. This won’t be free as you may have guessed, as it will cost you a further $149 to add that to your package, bringing the maximum possible price to $750 which obviously isn’t cheap.

One subject that we haven’t discussed is battery life – an essential factor with conscious consumers before they head out and purchase. ASUS has said that the Prime will offer an impressive 12 hours on a full charge thanks to a 25Wh battery, or 18 hours when connected to the dock.

If you want to pick one up, you’ll be able to do so in December, as ASUS will be releasing before the end of 2011, along with an upgrade to Ice Cream Sandwich. We are very impressed with what ASUS has brought to the table here, how can we not be since it is the world’s first quad-core tablet / laptop combo. Are you now looking at your iPad and thinking that it is inadequate compared to the mighty Prime? 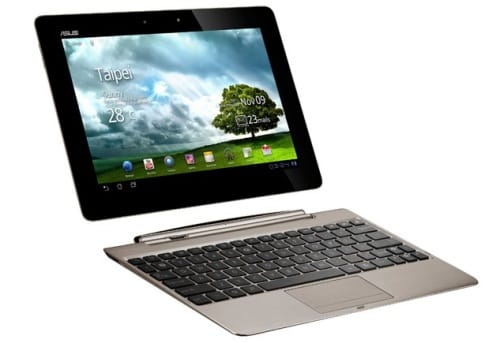