Chevrolet and Nissan have everything ready for the launch of the Volt and Leaf respectively next month. However, it seems as if Toyota wanted to get one last dig in before these electric vehicles launch; by saying that EVs were a niche.

Toyota does have a new version of the electric RAV4 coming out in 2012, but they are still committed to hybrid technology. Why wouldn’t they be, as they do have the most popular hybrid of them all, the Prius? I can understand why the Japanese automaker would not want to waste too much effort on EVs, as this is still new technology, and has a long way to go before it can be used for everyday travel purposes. 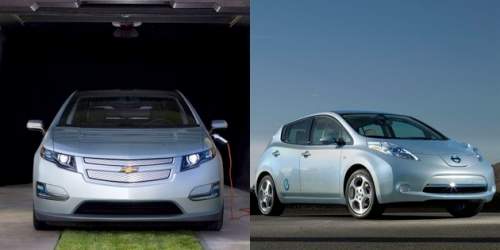 There is no denying that Nissan and Chevrolet are committed to this technology. Nissan has already a team of engineers setup to solve any issues that might arise from the Leaf, as they would not want these problems to get out of control.

GM owned Chevrolet has put a huge amount of money and resources behind the project, as they believe this to be the future. According to an article on Technology Review, they learned that Nissan claims that 10 percent of their vehicle sales in 2015 will be EVs, whereas 10 percent of Toyota’s will be hybrids.

If you were a betting man, which of the two would you say has the better future — Hybrid or Electric Vehicles?