Apple has kept away from integrating a full touchscreen into their notebooks, the 2014 MacBook Pro might change all that but in an innovative way not like the normal touchscreen displays some computer users are used to. Keeping the stunning Retina display and adding a secondary means of display/touch input could create an amazing all new MacBook Pro 2014.

In the Product Reviews office we mainly use the current MacBook Air and Pro, but we also have a couple of TouchScreen Windows PCs for diversity and review purposes. The touch might not be as responsive as your average tablet or smartphone, but we can see the benefits with touchscreen computers and especially in an education environment.

How could a MacBook Pro 2014 add touch, but make it more productive? Apple has a plan and patent that involves using a two-sided glass display that could contain the usual Retina MacBook Pro display on one side, but on the rear you’d also find a secondary display for touch and with cells for solar charging. 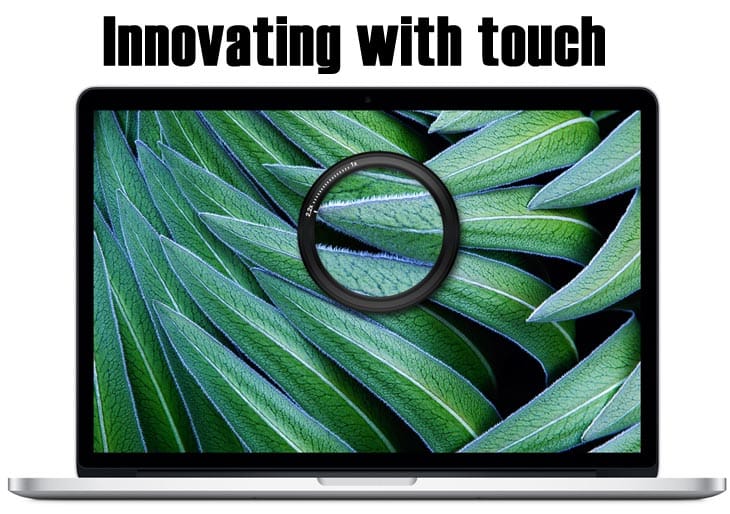 Like with many Apple patents, this might never release on the 2014 MacBook Pro but if it did then we could see an upgrade millions of fans would want. Even if you purchased the 2013 MacBook Pro, could you imagine having an additional display with touch and capable of solar charging?

We can think of many situations where solar charging and a second display would come in handy, let alone having that display solar charge and help add touch support as standard. You can read more about this patent right here on the USPTO website.

Would you rather a secondary display for touch input than the main display like other laptops? If the MacBook Pro in 2014 had this innovation, would you upgrade?

We also hear this week that Apple is increasing the supply chain workforce with more managers and engineers, which is basically aimed at increasing the speed of production. This would certainly be welcomed by those having trouble finding stock of must-have Apple products.