These days pretty much any company who has ever manufactured laptops or smartphones is keen to dabble in the tablet market, it is clear that Apple has set high standards with the iPad and iPad 2, however Google’s open-source platform, Android, has attracted the likes of Samsung, Motorola and LG etc, now Toshiba has come up with a new tablet which they call the Thrive. Engadget’s Dana Wollman recently reviewed the Thrive and scored it a mediocre 6/10. in our article we will summarize why it received this score.

We will start things off on a positive note, Wollman highlighted 3 aspects of the Thrive which cannot be ignored, one of these aspects is its price. Prices start at just $429, for those of you who are “in the know” this is cheaper than most of today’s most impressive tablets, therefore we are sure it will turn some heads, but Engadget’s review score does suggest that spending a little more on an alternative tablet may be wise.

Other things in the Thrive’s favor are its ports, these days plenty of manufacturers use non standardized ports to save on space, however we were impressed by the fact that the Thrive features a standard USB port, a miniUSB port and a proper HDMI-out port. It does not end there either, you also get a memory card reader which is compatible with SDXC cards. The fact that there is a USB port and support for large memory cards make its easier than ever to back up photos etc, Engadget also say that the file manager and printing apps which come with this tablet as standard are great. 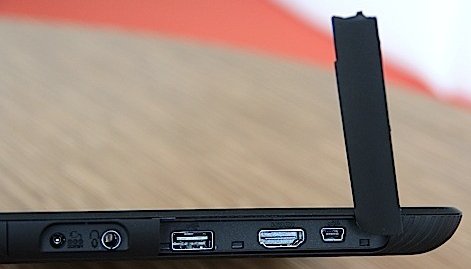 So why the 6/10 score? Well as the score suggest the Thrive is far from perfect, these days people want long-life from a single charge, in tests with a movie on loop, WiFi on and Bluetooth off it delivered just 6 hours 25 mins, this is by no means awful, but noticeably less than the iPad 2 and Galaxy Tab 10.1 which both achieved over 10 hours of life in a similar test. Over time batteries do deteriorate, therefore it is nice to see that the Thrive’s battery is removable, simply remove the cover and the battery can be taken out easily. While we are on the subject there’s a range of covers available, as standard the Thrive is black, but you can buy additional covers for $20 each, so far we have heard of blue, raspberry, lavender, sliver and green options.

As with most of today’s tablets there are front-facing and rear cameras, you can see sample photos taken with the rear-facing camera here and the front-facing camera here. As you would expect the front-facing camera is going to be used more for video chat functionality, so stills aren’t that great, as for the rear camera the stills lack sharpness and the colors captured are by no means vibrant. The 5 megapixel camera’s photos look very grainy and we are told that the position of the camera makes taking landscape images awkward, Engadget say that it does not “Thrive” in low-light conditions either.

Finally we must mention build quality and materials used. When you pick up an Apple tablet it feels light and thin, yet solid, the same can’t be said about the Thrive. It is 15.7mm thick and weighs 1.66 pounds, this makes it nearly double as thick as the iPad 2 and as for its weight it is heavier than the first-gen iPad, to put this into context the Thrive is roughly 150grams heavier than the iPad 2. When describing the build quality Engadget use adjectives such as cheap and flimsy, however they do compliment the rubberised back cover which gives it grip and added protection.

You can find out much more detailed information regarding the Toshiba Thrive by checking out Engadget’s full review here, they also talk about different capacities, prices and even a 3G version of the Thrive. It has to be said that in terms of performance the Tegra 2 SoC did not disappoint, like other tables Flash content caused things to slow down, however in benchmarks it was just as impressive as the Samsung Galaxy Tab 10.1.