Last week we discussed how Intel could power several touchscreen Windows 8 devices for a price below $200, and while these will be very good in terms of profit for Microsoft, there is still a need for high-end devices to compete with the likes of Apple. One such competitor is the Toshiba Kirabook, which has its sights set on two Apple notebooks.

It’s clear by looking at the specs and pricing structure that Toshiba has its sight set on the 2013 MacBook Pro and 2013 MacBook Air, but does the Toshiba Kirabook have what it takes? What makes this new Windows 8 laptop so interesting is how the one device will take the fight to the two Apple devices. 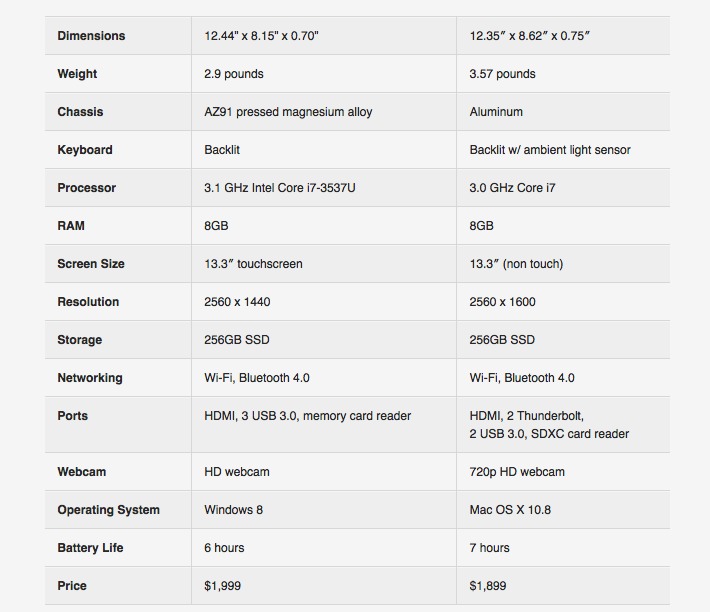 The 13-inch display of the Kirabook has a 2560 x 1440 resolution, which is similar to the Chromebook Pixel and MacBook Pro with Retina Display. However, there is a downside, as the viewing angle is rather limited on the Kirabook, so you need to sit right in front of the device. However, this is not much of an issue, because I never sit on my laptop at an awkward angle.

This is the first Windows 8 laptop with such a high screen resolution, and while it is $100 more and has an hour less battery life than the MacBook Pro, it’s lighter and comes with touchscreen. It’s for this reason if you are not bothered about Mac OS X or Windows 8, then the Toshiba Kirabook could be the laptop for you if you love the specs of the Pro and the design of the Air. However, it’s worth remembering that Apple could revise these two notebooks later this year, maybe during WWDC.

Thanks to Digital Trends.