If you read our previous article that compared the Top Spin 4 roster to the Virtua Tennis 4 roster, you will already know that the Top Spin roster features some true tennis legends. However, it appears that 2K Sports has just released a trailer, which draws attention to some of the tennis greats.

According to a recent article over on thehdroom.com website, the tennis great that appears to be the focus of attention is Andre Agassi, who makes his much-awaited appearance in the Top Spin 4 game retro-style. Agassi isn’t the only legend that is seen in the video though. 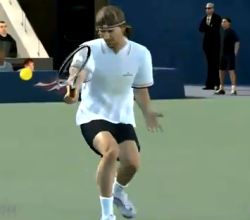 Darryl over at gamingunion.net got a chance to try out the Top Spin 4 game back in January, and described it as the most accurate representation of the sport to date. As Darryl notes, the Top Spin 4 game looks as though it will be the one that pushes the tennis genre forward.

You can read Darryl’s full preview via gamingunion.net. Are you looking forward to the release of the Top Spin 4 game?