Now that the winter weather is setting in and you’re less likely to go out, you might be looking for things to do. Video games are always a good way of keeping yourself amused, whether it’s on the PlayStation 3, the Xbox 360, Nintendo Wii or even the PC.

If it is PC games you enjoy playing, then it might be worth visiting a recent article by Lewis Denby over at pcgamer.com. The article provides a list of the top 6 free Microsoft Windows games for November, including Octodad, Radical Fishing and Sydney Shark. 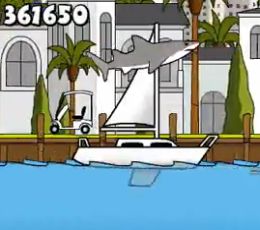 The aim of the Radical Fishing game is to throw your hook deep into the ocean, and catch as many fish as you can. You then have to fire them up into the air, and shoot the living daylights out of them. It may be a completely silly game to play, but it is hilarious.

In Sydney Shark, players have to rack up their score by diving underwater and boosting themselves back out above the water, snapping at anything and anyone that gets in your way. The shark can even land on boats, and cling onto and drag down planes.

The idea of Octodad is that you play an octopus that is pretending to be a male human, who has to go about everyday life without arousing suspicion that you are in fact an octopus. The game may be rough and contain glitches, but it’s an absolute joy to play.

You can read the full list via pcgamer.com. What’s your favorite free PC games to play?