When Street View was first launched it was seen as direct competition to TomTom. However, Google might have to look over their shoulder soon, as TomTom might be muscling its way back again if this recent image from GeorGraphy is anything to go by. You can see that there are vans with cameras on top; much like those we have seen driving around in recent years.

We have no proof that this is what TomTom are doing, but it certainly makes you think. Engadget notes that the vans have only been seen in Belgium and France, so will be interesting if we see a TomTom Street View-like service in the not too distant future in those two countries? The GPS company needs to add something new to their current system, as they are being left behind by some of the newer companies offering a similar and better service.

Having said that, TomTom need to be careful what they are doing, as they do not want to get into the same situation that Google did with their Street View service coming under constant attack for invading privacy. However, one would expect TomTom to implement theirs in a totally different way. 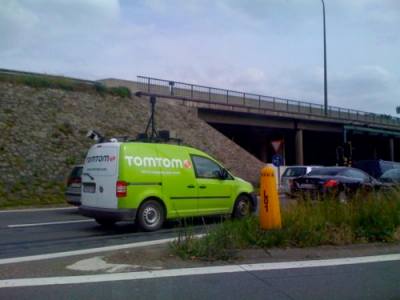 Maybe one way is for current TomTom devices to not use animated maps, but real ones found on Street View. They could then make theirs a little different by taking out certain features like cars and people who were walking around when the vans came around to take the photos?

We know that is an almost impossible task, but it could be done. Will TomTom ever be able to compete with Google’s Street View?