A new application has just been released which will allow users of the successful iPhone TomTom apps get directions faster. TomTom Now 1.0 is available for owners of the iPhone, iPad, and iPod Touch.

Released by Bacon Bear Productions the application allows you to enter destination address quickly in any format. Addresses can be added in single line or multiline, or they can be copied and pasted from another app such as contacts, mail, maps, and text messages. This will speed up the time it takes for your device to find your route.

Users can configure addresses into favorites and recent lists for those frequent locations. Points of interest as well as airport codes are recognized by the app. There is an auto launch feature where TomTom is launched if an address is previously copied in another app. 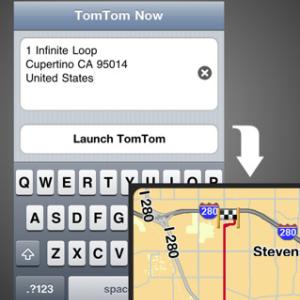