The 2012 Chicago Auto Show opened to the public on February 10th and will run up until the 19th and in that time they will get to see all the latest upcoming vehicles and concepts, the same models that the media were privileged to see before hand. Every day there is a different schedule along with special appearances, which all kicks off today at 10am local time where one lucky visitor will get a chance to win a free iPad 2.

Looking at today’s schedule below we can see there is a lot to get through in 11 hours but it’s easy to see that there’s something for every taste, so if you like SUVs, muscle cars or listening to the awesome entertainment systems that will be in upcoming vehicles then today’s Chicago Auto Show has you covered.

We know you have different tastes when it comes to what is on offer at these shows but if we could pick just four events going on today at the auto show then we would have to pick:

The Annual Jeep Track where you get see how a Dodge/Jeep handles on an off-road circuit, which is where these vehicles were meant to be. A pro driver will put either the Jeep Wrangler or Dodge Ram through its paces, which we have to say will leave you wanting more and there’s nothing like having an SUV with a load of mud on it because that’s the way they are meant to be.

For those who care more for the environment then maybe you should head over to the Chevrolet Volt Ride & Drive Experience display, which is where you will get to learn more about the technology along with the benefits involved when owning one of these amazing vehicles. However, we do have to warn you the technology is still young and will be a few more years before vehicles like these will become more cost effective. If you are still interested then you may as well head over to the Nissan Leaf Ride & Drive display as well. 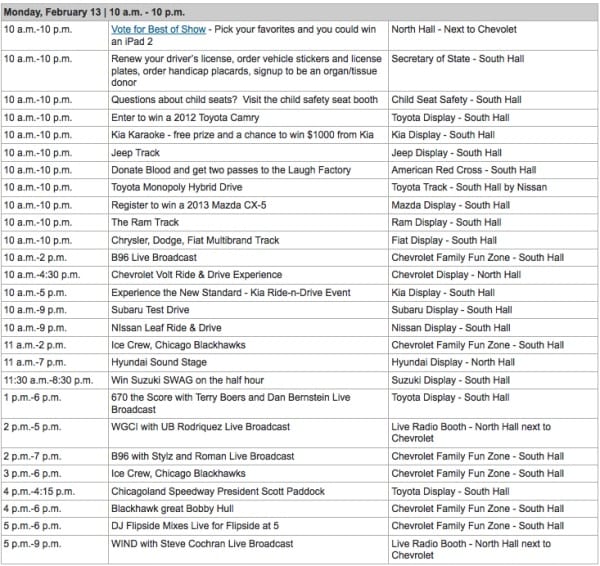 There are a number of drivers who would rather see cars that perform at their limits, so the Subaru Test Drive display in the South Hall could be perfect for you. We’ve seen them powering round racetracks and dirt roads so here’s your chance to see them up close and personal.

If you will be attending the show and would like to be kept up-to-date with what’s going on then just text ‘At the Show’ to 37483, where you will also be in with a chance to get meal deals and win some prizes by taking part in contests.