The Tinder app seems to be not working for many users, or at least this is what it looks like after visiting the official Facebook page and Twitter. Some of these problems with the Tinder app have been addressed, although a fix is on the way but didn’t release when promised.

You can see a screenshot from the Tinder app Facebook page that currently has over 25,000 fans, although a number of these users have reported issues and left messages about the Tinder app not working.

We have included a quick screenshot below that details a message left by the Tinder app developers, and an update was promised right at the end of last month. Now more than 3 weeks on, we still see that the iPhone app is at version 3.0.2 with no update since Dec 19, 2013. This is after Facebook users were told not to worry if they were experiencing bugs, because the team were “working on it” and a new update was due next week. 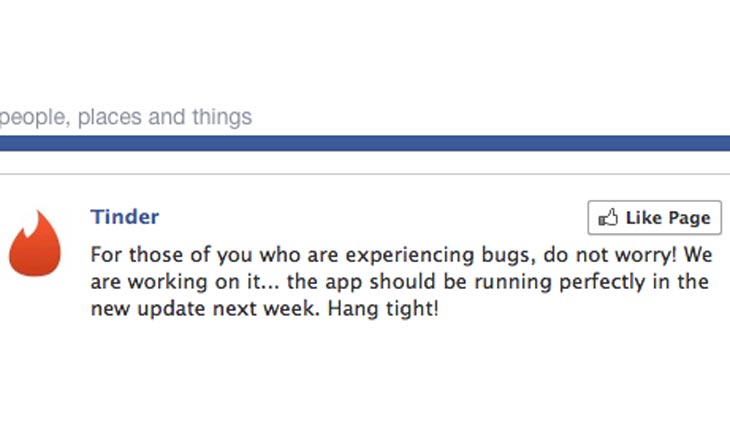 The Tinder app is still not working for some It is obvious that the issues will be fixed as soon as possible, but this hasn’t stopped a few people complaining on social networks and in forums. Problems are quite diverse and range from messages stating, “Facebook login cancelled” to users explaining they couldn’t get passed the “SMS verification process”.

One Product Reviews reader explained, “I tried all my numbers, but the Tinder app SMS verification process won’t work”. Another added, “I always get the same SMS verification code, then the app never accepts the code”. We have also heard about problems adding photos in the Tender app and one user stated, “I can’t upload photos, I save and crop then nothing”.

Is the Tinder app not working for you? If so, do you have issues with adding photos, SMS code verification, or something else?

It is also worth pointing out that while the last update added better iPad support, some people want a dedicated tablet app to improve the overall user interface on the bigger display. Let’s hope that the 3.0.3 update brings iPad support and fixes issues a lot of users are experiencing right now.