We have some pretty exciting news now for all those gamers who love playing the Tiger Woods PGA Tour games, as EA Sports has recently announced details for the next installment in the franchise. Not only have they revealed a spring release date, but also released a few screenshots.

According to a recent article by Tom Hopkins over at nowgamer.com, the next game will be called Tiger Woods PGA Tour 12: The Masters and as the title suggests, the game will allow players to compete in The Masters golfing tournament via the “Road to the Masters” career mode. 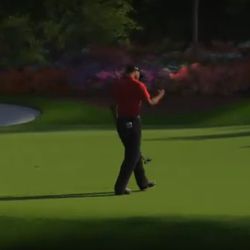 The Tiger Woods PGA Tour 12 game will feature the courses of the Augusta National, as well as the ability to relive classic moments from The Masters. EA Sports has also promised a new save system that will enable players to continue play mid-round, and a brand new “fast golf” gameplay mode.

Tiger Woods PGA Tour 12: The Masters will be arriving in US stores on 29th March, while European gamers won’t have access to the game until April 1st. As for the cover of the upcoming game, it appears that EA Sports has decided to drop the golfing legend from the box art.

As Wesley Yin-Poole from eurogamer.net reports, EA Sports seem to have left Tiger Woods off the front cover, and opted instead for a bigger Masters logo. What do you think of the screenshots (seen over at nowgamer.com) and the fact that Tiger Woods isn’t on the cover?