If you thought that today’s smartphones and tablets were fast, think again, Texas Instruments have recently revealed a press release showing of a new chip they call the OMAP4440 processor.

The OMAP4440 chip will apparently feature 2 x ARM Cortex A9 processors with core speeds of up to 1.5GHz, apparently this will be enough power to deliver 1080p stereoscopic 3D and will greatly out perform the yet-to-be-released OMAP4430 processor.

Apparently the OMAP4440 will give you 1.25x better graphics performance than the OMAP4430, other comparisons between the two processors show that the new chip will cut webpage load times by 30% and deliver twice the 1080p video playback performance.

It is thought that OMAP4430-based devices will begin arriving in the first half of 2011, due to the fact that the OMAP4440 is an extremely similar processor it will allow manufacturers to easily give their devices a performance upgrade.

If you check out Engadget’s recent article you can read Texas Instrument’s full press release, here you can see fully detailed information regarding the OMAP4440, as for when we will start seeing devices featuring this impressive chip, nothing is confirmed, however we can safely say that they won’t arrive until at least Q3 2011.

Below we have embedded an image showing the chip block diagram, click on it if you would like to see a full-size version. 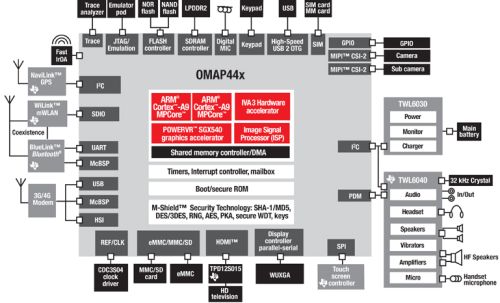 What would you do with an OMAP4440-powered device?