For all you Led Zeppelin fans, there is a great application which was recently released. This Day In Led Zeppelin 1.00 is available for owners of the iPhone, iPad, and iPod Touch.

Released by This Day In Music Apps, fans of the classic rock band will find plenty of information and history about Robert Plant and the gang. This joins a series of applications which chronicle the biggest names in music throughout history.

Included in the app is information on every concert the band ever played, which include set lists. Find out about recordings, TV performances, and the daily Zeppelin diary. You will also find a Zeppelin quiz which has hundreds of interactive questions, and are scored out of ten. There are also unique score sound clips. 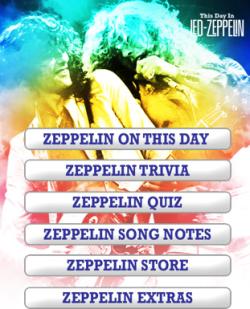 Also included in the app is analysis of every studio track and Zeppelin album, with a unique link to play any Zeppelin tracks you may have in your iTunes library. This is all done from within the app, and you can even buy tracks to complete your collection via iTunes. There is even a free Zeppelin wallpaper, and many photographs of the band live.