There has been a lot of debate on what Samsung will be showing at the upcoming Mobile World Congress in Barcelona this month, after the company confirmed that they will not have the highly anticipated Galaxy S III smartphone on show.

We have wrote in the past about the possibility of Samsung unveiling a next-gen tablet at the show and while that is still very much possible, we have another snippet of fresh information to bring you now, regarding a new variant of the Samsung Galaxy S II that may be featured at the event as well.

An image of an unannounced device has been the subject of interest over the last 24 hours, and it apparently reveals that Samsung will be showing off a new Ice Cream Sandwich smartphone at MWC, one which looks a lot like the Galaxy S II, as noted by BGR. We know that we won’t be seeing the GS III so there’s whispers that this phone may turn out to be the Samsung Galaxy S II Plus.

Changes from the S II include capacitive buttons located at the bottom of the device which have been designed specifically for Ice Cream Sandwich. The image also suggests that Samsung will be including their latest version of TouchWiz on the device on the top of ICS as well. On a note of interest, the origin of the image has come from Eldar Murtazin, the very same person who claimed to be in possession of an early Galaxy S III unit.

He seems very confident in his Tweet here, so we’ll have to wait and see what happens. The device certainly looks lovely regardless, so we are hoping that we do indeed see this mystery Ice Cream Sandwich S II variant on show at MWC. Take a look at the image for yourself and let us know what you think of it – looks too good to be a fake right? 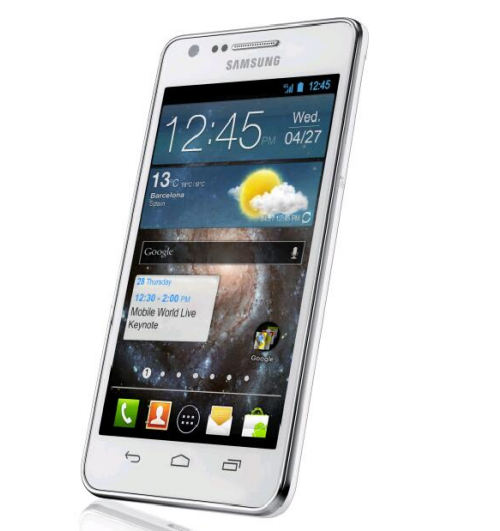