As promised, CD Projekt Red has finally managed to push out a new The Witcher 3 update on PS4. For those looking, we can now bring you the full Witcher 3 1.03 patch notes on PS4 as we can see that there’s been some main improvements to performance.

A lot of you have been having issues with the PS4 version, namely problems with Witcher 3 game saves not loading, as well as sporadic crashes happening at some moments in the game.

Well now you have a full list of changes in The Witcher 1.03 on PS4 to read through, as Marcin Momot the community manager for the game has already posted the notes to the official forums. 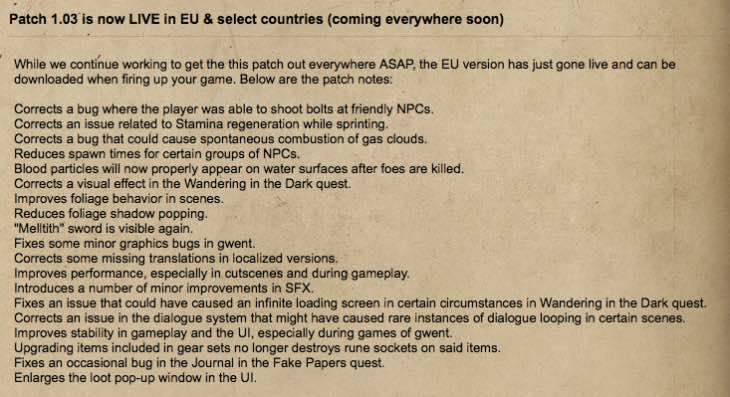 As you can see they include changes such as improved foliage behaviour, improved performance in cutscenes and general gameplay, reduced spawn times for some NPCs and a fix for stamina regeneration while sprinting.

Hopefully after you have installed, your experience on PS4 will be much better. Don’t forget though PC owners have already had 1.04 released, so the developers will be working on that for PS4 too, so another update will be coming sooner rather than later.

Install the update and let us know how your game plays on 1.03.