For all you comic book loving, gaming geeks out there we have news about the perfect Valentine’s gift for you this year. With the release of Marvel vs. Capcom 3 almost here, Marvel and PDP (Performance Designed Products) have joined together to produce this new Marvel Versus Fighting Pad.

The idea of the pad is to give gamers that classic arcade gaming feel that most people want when they play such fighting games. With its 6 buttons on the front and longer thumb stick, this compromises between the two styles of gaming controls perfectly. Why not check out the video we have once you’ve scrolled down.

The story comes from the PDP article where they explain that the pad when compared to playing on an actual arcade machine, feels just the same also having a highly accurate feel when playing these types of games thanks to micro switch activators in the thumb stick and 2 x 3 buttons. You can read the rest of the article here and the site also includes a full press release which can be viewed here. 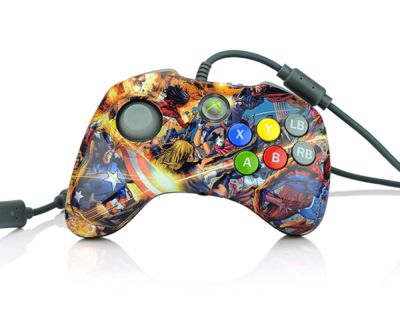 If you’re thinking of getting one of these ‘kick-ass’ pads which come complete with a Marvel Artwork design, they are now available for pre-order and are expected to arrive February 14th. As of yet they are only available for the Xbox 360, but should they succeed we expect it wouldn’t be long before they made appearance on the PS3.

What do you think of the Marvel Versus Fighting Pad? Let us know in the comments below.