Naughty Dog has announced on Twitter The Last of Us patch 1.09 and the Remastered version received patch 1.03 within the last 24 hours. You can see the notes in full below, and if you haven’t played in a little while you might want to get gaming this weekend to enjoy a couple of new maps along with bug fixes.

The Last of Us Remastered on PS4 benefits from a fix to matchmaking problems, which a number of our readers mentioned seeing previously in the Factions mode. The PS4 update will take over a day to rollout across the globe, although we have confirmed the update is live in both UK and USA. The PS3 version will “follow” shortly.

You will find Financial Plaza and the Beach, as the two new free maps in multiplayer. You will find these maps within The Last of Us Remastered on PS4, sized at 137 MB, and within the older PS3 version sized at 170 MB.

Maps will also add to the download size, which should see a 291 MB maps download on PS4 and 143 MB for maps on PS3. It is unclear if these download sizes vary by country, although feel free to mention any different sizes you received in the comments along with your country.

If you feel like splashing some cash, then you can purchase the Scoped Weapons Bundle for $2.99 in North America or £2.49 in the UK. There’s also the option of buying the weapons separately, but this will cost you more unless you just want one item. 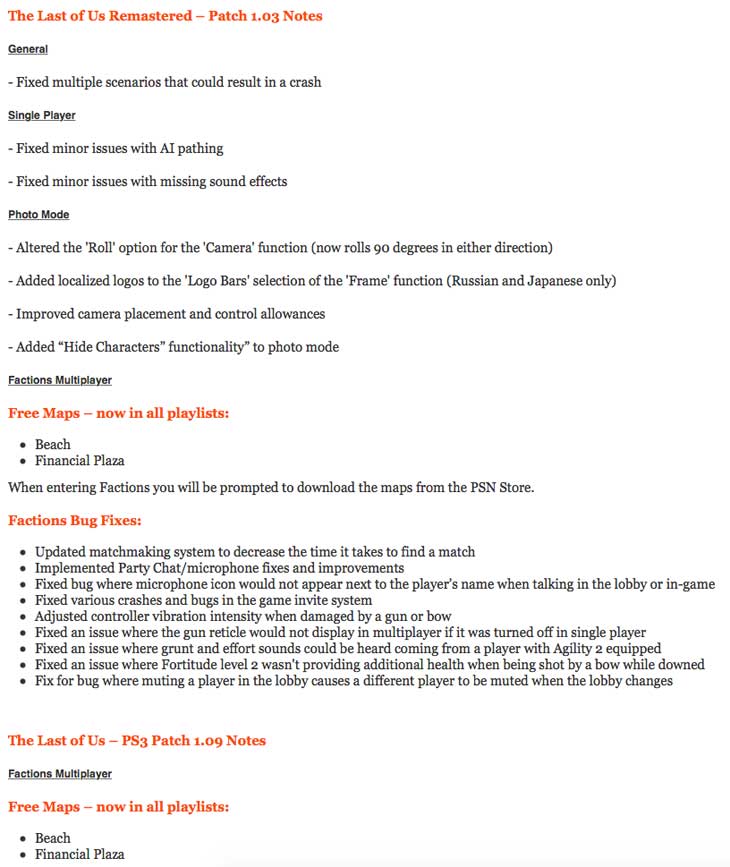 What would you like to see included within The Last of Us PS3 1.10 and Remastered PS4 1.04 patch notes? Thanks goes to Naughty Dog.

The Last of Us