When we first showed you the debut trailer for Naughty Dog’s upcoming game called ‘The Last of Us’ it was hard to ignore the breathtaking visuals, today we thought we would pull in information from multiple sources to clear up everything we know about this title so far.

Let’s start with the obvious, The Last of Us is a PlayStation 3 exclusive which is being developed by Naughty Dog, expectations are very high following the success of the Uncharted franchise and many beleive that when it arrives in 2013 it will be the best-looking PlayStation 3 title of all-time. Wikipedia describes the game as a “third-person survival horror action-adventure”, one game which also falls into this specific genre is 2009’s Resident Evil 5.

There are two trailers which you need to watch, both of which have been embedded at the bottom of this post. The first of these is a teaser trailer which shows a real parasitoid fungus that infects ants, once infected the term zombie ants is widely used to describe them and eventually the ant will bite into the vein of a leaf and die with a stalk extending from the back of its head – nasty eh? Check out Wikipedia for more information about Cordyceps unilateralis.

The next trailer is made up of in-game footage, you get to see the two main characters and the enemy, also you get to see what looks like an eerily empty world. As many have mentioned it looks a lot like the 2007’s ‘I Am Legend’, a blockbuster movie which starred Will Smith.

We didn’t really pay too much attention to the trailer, well apart from drooling over the stunning graphics, but then we saw an interview with two guys from Naughty Dog (embedded at the very bottom of this page). One of the guys says the following:

“Keep watching the trailer over and over again, lots of clues and little teasers in there about what the game’s about, you will be finding out more in the coming months”

After hearing this quote we watched the trailer over and over in the hope of finding something exciting which we spotted, sadly we didn’t! But here’s a few thing which we have found:

The young female character is called Elly and many are pointing out that she looks a lot like Ellen Page. We don’t know the male character’s name (perhaps Noel) but some are saying that the male character looks like Viggo Mortenson. The voice actors playing these people are said to be Troy Baker and Ashley Johnson.

The game’s name, The Last of Us, suggests that to their knowledge they are the last normal people alive and ammo must be low as Elly seems extremely happy to find a few bullets from a fallen enemy. If you check out the screenshot below you will see that the enemy looks like a mutated human being with something growing from his face, it looks like a similar parasite to what the zombie ants get. 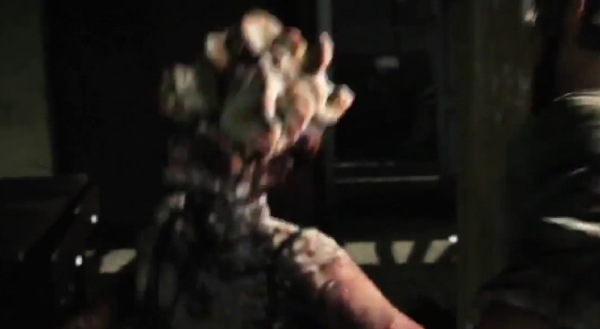 At the end of the video Elly says “this is our routine, day and night all we do is survive, in never lets up. He tells me how these streets were crowded with people just going about their lives, it must have been nice”, this suggests that the world has been like this for quite some time as Elly (presumably a teenager) has no recollection of a crowded world. Something which many YouTube viewers find interesting can be seen in the second video, at roughly 1 minute 44 seconds – you will see the main character seemingly seeking approval of Elly before cocking his gun, only after she nods does he cock it. Could this mean that Elly is more than just a young female character who has been dragged into this situation? So many questions and so few answers…

Check out all the videos below, can you spot any of the things which Naughty Dog describe as “clues and little teasers”? If so leave us a comment…

naughty dogThe Last of Us