The Evil Within is a little different to some of the more recently released games, as its release date is a worldwide thing, and so the likes of people in the US or Japan will not get their hands on it before people in the UK or the rest of Europe. While many of you will wish to know what the The Evil Within price will be at GameStop and other US retailers, we thought we would look into the UK pricing first.

Gamers in the UK do have a decent choice of where to buy their games, but if buying on the day, then the likes of ASDA, Tesco and GAME are the most obvious choices. We thought we would take a look at their pricing to see just how they compare, although there are no reals surprise here. 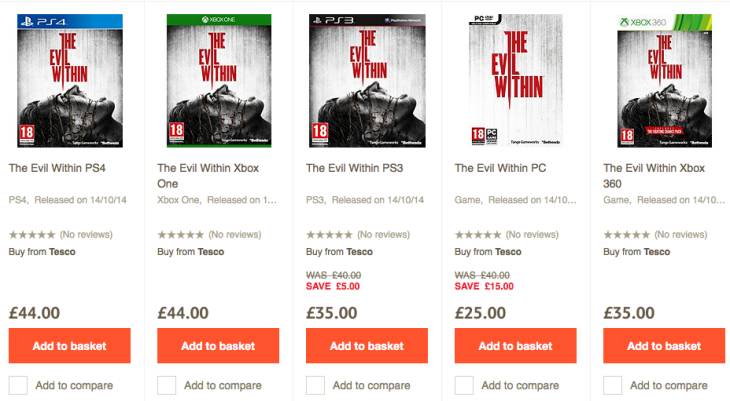 The Evil Within price at ASDA is £35 for the Xbox 360 and PS3 versions and £44 for the Xbox One and PS4. As for Tesco, you will have to part with exactly the same money for all four consoles. However, the latter supermarket also has the PC version, which was £40 and has been reduced in price to just £25, which is a pretty good deal.

With GAME, you have two versions, Standard and Limited Edition. The Xbox 360 and PlayStation 3 versions are £36.99 and £45.99 for the Xbox One and PlayStation 4. You can also get the PC version for £24.99. It’s obvious that you do not want to go to GAME for the Standard Edition.

Where will you be buying your copy of The Evil Within tomorrow?